Inside story on a Hamptons marvelRetro remake

A lot of times, when you get people to do stuff for you, they are bloody hopeless. That wasn’t the case with Rosemount. They were great to work with – really good and professional. 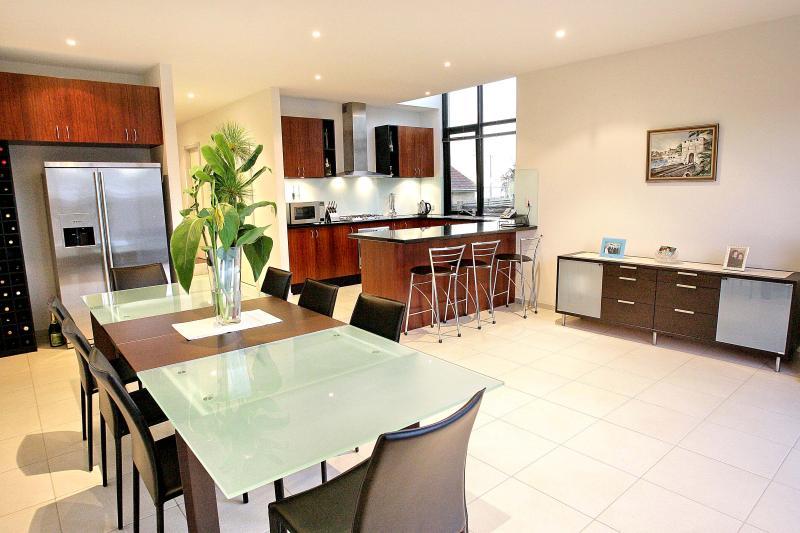 Chris and Martyn’s kitchen before the renovation.

Ten years after moving into their home, Altona couple Martyn and Chris Perry decided it was time to finally update their kitchen.

Their house was built around 2000 and the kitchen that came with it had served them well.

But little things weren’t quite right. The gas hotplates weren’t quite big enough and the oven hadn’t been particularly reliable. Doors were past their best and the cream tiled floor got dirty too quickly. Overall, the kitchen felt a bit dated.

“My wife wanted something a bit lighter, brighter and more modern,” says Martyn, who also wanted the new kitchen in place ahead of the couple’s plans to retire in 2019.

At first they thought about changing the doors and updating some elements.

“The old kitchen was pretty good and we just wanted an update,” adds Martyn.

“But we eventually decided to do the whole kitchen. We thought, ‘if we’re going to do this let’s spend the extra money and do it properly’. If we’d just changed the doors we would have nothing like we’ve got now.”

Same layout and pantry but a complete transformation 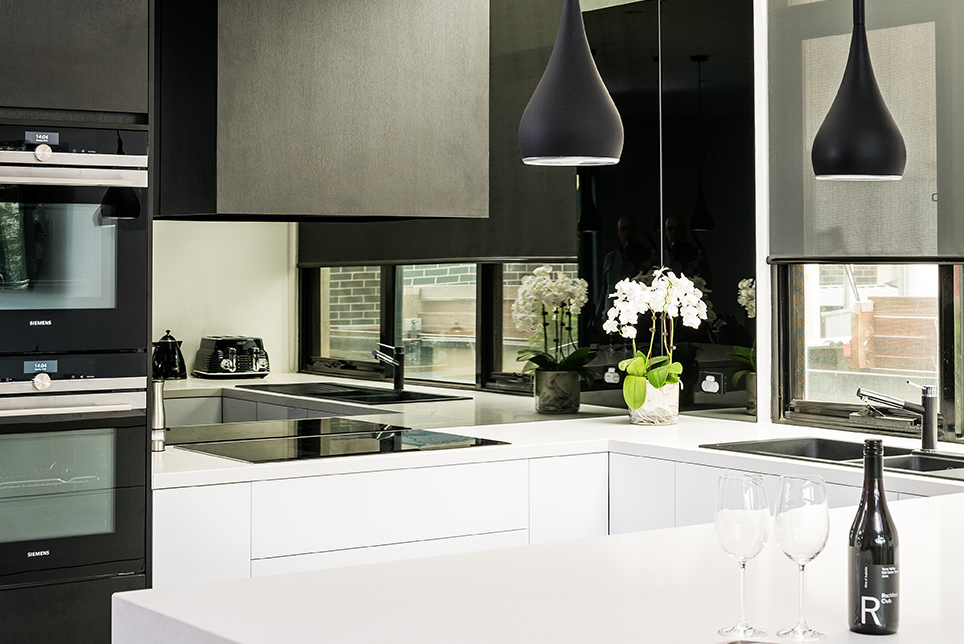 Chris and Martyn’s old kitchen was effectively split into three different areas. The main kitchen space was on one side of a hallway and the fridge on the other. A sizeable walk-in pantry with open shelving took up space behind the fridge, but was accessed through a door in the hallway.

After discussing options with Rosemount’s kitchen designer, Martyn blocked in the pantry doorway in the hall, and knocked out the wall space behind the fridge to create a new pantry entrance.

Their new fridge moved to an adjoining wall with new cabinetry and a sink that Martyn describes as his “coffee nook”.

The main kitchen area maintains the same layout, but with deeper benchtops.

“We really like how it has worked out,” says Martyn.

“When Brad the designer came round we discussed what we wanted to do and we thought it would be better to have the pantry facing the kitchen area rather than the hallway.

“I put a tall door on the pantry and it all just flows.

“And the fridge is out of the way of the cooking area. If people come in and want a drink or something out of the fridge they are not hassling the person who is in the main part of the kitchen.”

Updating in black and white 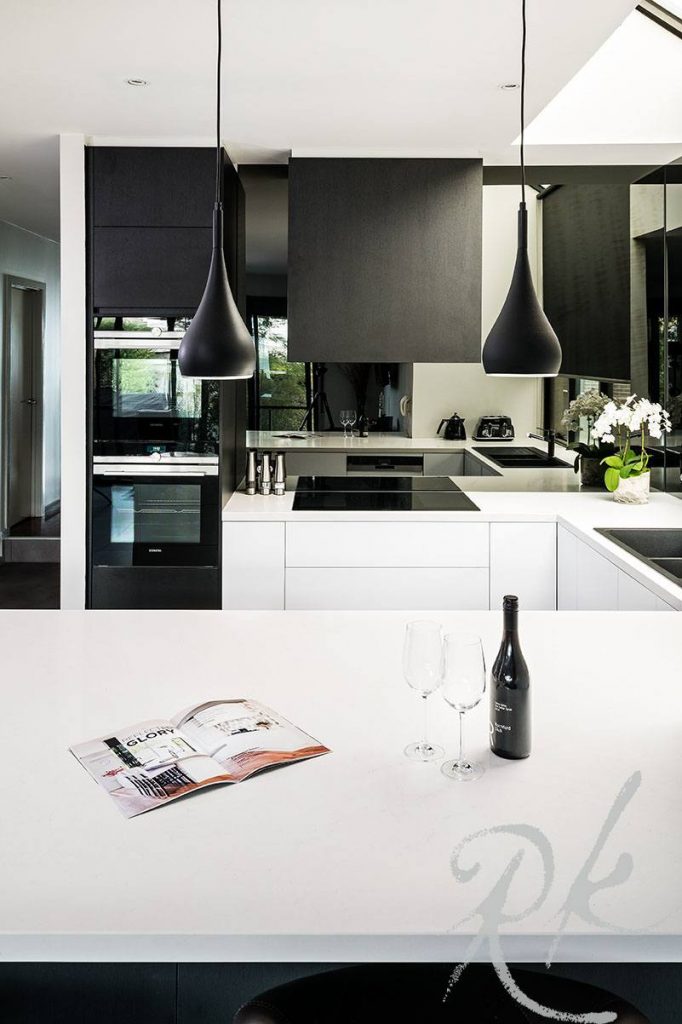 The new kitchen keeps the same general layout as the original – but the quality and style is superior.

They were initially looking for a largely white kitchen but plumped for black cabinetry, ovens, hotplate, around the rangehood and window frame to provide contrast and help ground the lighter benchtops and walls.

The light benchtops are Caesarstone Frosty Carrina, and the wider return is more like an island bench.

Martyn likes the look and functionality of the new benches, but is still getting used to the fact that they run flush with the soft-close drawers below, rather than a more traditional “lip” overhang.

“In the showroom we saw this new design where you run your hands up the drawers and go go straight up onto the benchtop,” says Martyn. “In a traditional kitchen the bench overhangs the drawers by about 25mm.

“And it takes a bit of getting use do because as soon as you against the bench the drawers and doors open. So I think you need to train yourself to stop leaning on the bench.”

“We went with Brad back to the showroom and they showed us the smoky glass mirror splashback,” adds Martyn. “Chris really liked that, so we went with that.

“That was good because we were able to see and then choose from the extensive displays that Rosemount had.” 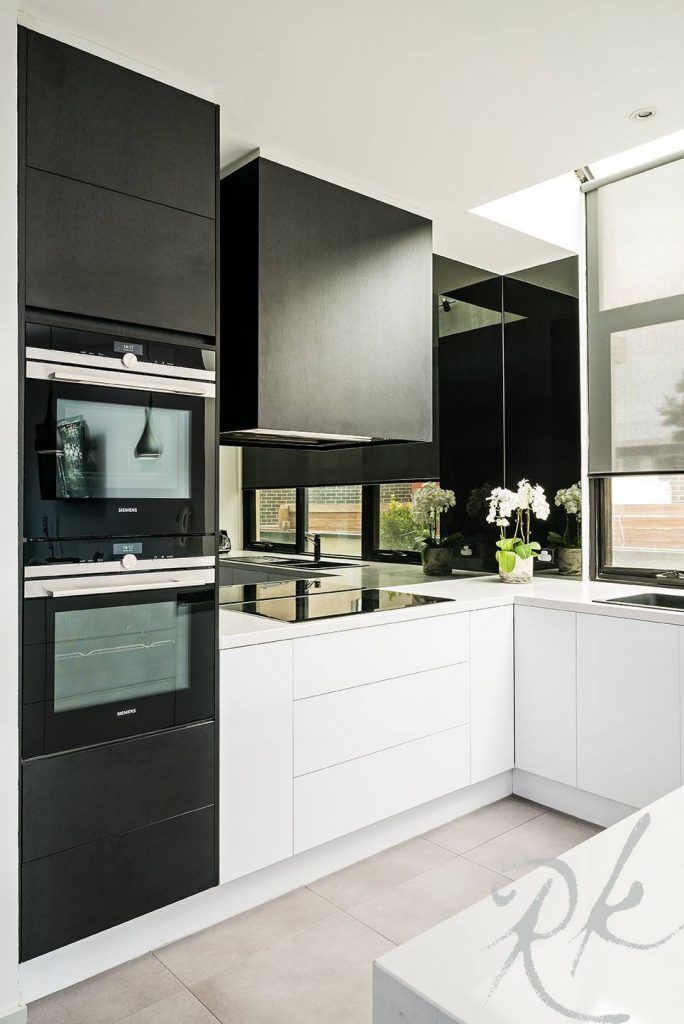 “We like the double oven,” says Martyn. “There’s only two of us but when we’ve had people round and maybe wanted to cook a roast it was harder with the single oven.

“Say you wanted to also cook a Yorkshire pudding, then you’d have to put the roast in first and the Yorkshire later on, so it was a bit fragmented. Now we can cook everything at the same time.

“The hot plates are also a lot bigger. We went with electric induction hotplates, and it took a little bit of time to get used to but there’s good control on it and we like it.”

There’s another plus – the new dishwasher. The Perrys never got the hang of the previous dishwasher and always hand washed.

“Because we’re a bit older, we are dish washers rather than users of the dishwasher,” says Martyn.

“But now we are making ourselves use the dishwasher, which has saved us a lot of time.”

Working with Rosemount to create a beautiful new kitchen

When Martyn and Chris first started looking at getting a new kitchen, they contacted one of the big chain stores.

“Then we looked on the internet and saw Rosemount. We went for a drive to the Essendon showroom [in Melbourne’s northern suburbs] and the lady there was really nice.

“They also had good displays of different types of kitchens, benchtops, finishes on the doors and all that sort of stuff. They were really professional.

“Brad the designer came out to our home and he actually showed us the kitchen in his own house. He gave us a few ideas, some of which I’d thought of myself. I had a bit of an idea about what we wanted to do.”

Martyn took out the old kitchen himself before Rosemount arrived to install the new kitchen.

He was impressed by the professionalism of the Rosemount team and the whole process.

“A lot of times, when you get people to do stuff for you, they are bloody hopeless,” he says. “That wasn’t the case with Rosemount. They were great to work with – really good and professional.”